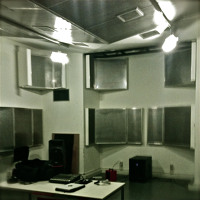 Day 10
The controller is pretty cool! and quite expressive! Today I’m constantly
trying out different kinds of mapping for the controller. I’ve taken out
the ringmodulators from the setup just so that I can better hear what the
effects in SuperCollider are doing to the overal sound.
Here’s a recording of the controller connected to the no input mixer sounds:
https://soundcloud.com/tapage/no-input-recording-014